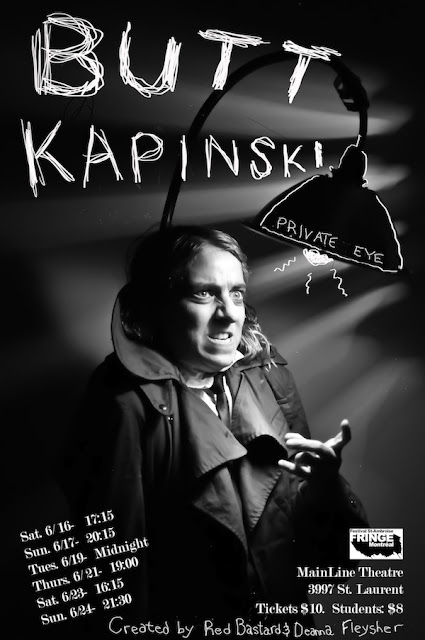 BUTT KAPINSKI, PRIVATE EYE
...a comedy, a mystery, an interactive noir fantasia
ABOUT THE SHOW:
Somewhere between Raymond Chandler and Bugs Bunny is Butt Kapinski, a private eye on a mission to investigate a mystery... and you’re all suspects.
Welcome to a world of darkness, smoke, betrayal, femme fatales, perversion, murdered bodies, and one clown in love with it all.
When the show doesn’t go as planned, when the mystery can’t get solved without everyone’s help, the audience and Butt take a ride together, delving into everyone’s dark sides to uncover the real film noir that is created anew at every performance.
TICKETS/ OTHER INFO:
Showtimes:
6/16 at 5:15pm 6/21 at 7pm
6/17 at 8:15pm 6/23 at 4:15pm
6/19 at midnight and 6/24 at 9:30pm
Tix:  10$, 8$ (students), +2$ service charge
Venue:  The MainLine Theatre, 3997 Saint-Laurent
Length: approximately 1 hour
ABOUT THE CREATORS:
Created and Performed by Deanna Fleysher
Written by Deanna Fleysher and Eric Davis
With Direction by Eric Davis
Deanna Fleysher is a performer, director and teacher of naked comedy. Inspired by clown, improv comedy, bouffon and physical theatre, she explores the bravery and vulnerability of being human. In New York, she created Foreplay, Kill Me Loudly (A Clown Noir) and The Kapinski Private Eye Academy, as well as performing her solo work at Galapagos, Symphony Space, and Lincoln Center. Her directing work includes Echo, "Emmet and Merril: To Opera With Love," and Red Bastard. She is now a resident artist at Artworks Theatre in Los Angeles. www.buttkapinski.com
Eric Davis created and currently stars in the role of Allen Smithee in Cirque du Soleil's IRIS at Hollywood's Kodak Theater.  His show, Red Bastard, has played to sold out audiences and received 5 star reviews across North America, Europe and Australia. Mr. Davis was awarded the NY Golden Nose Award for Clown of the Year in 2010 and is a 2 time Finalist for the Andy Kauffman Award.    He is the Co-Creator  and director of the award winning Bouffon Glass Menajoree as well as a founder of the NY Clown Theatre Festival. www.redbastard.com