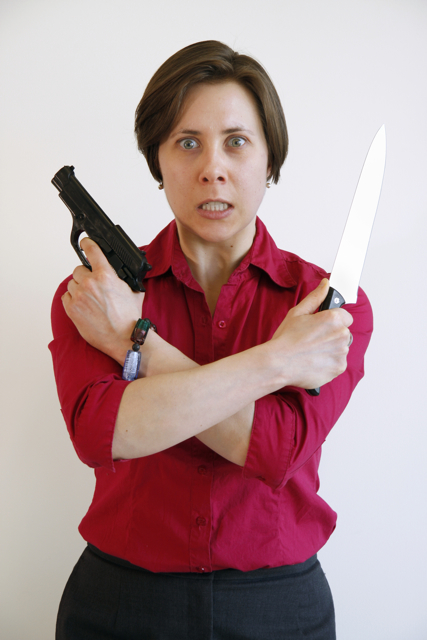 FEAR AND LOATHING AT THE MONTREAL FRINGE
Triplecross comes to the party
by Anna Fuerstenberg
Why would anyone want to direct a play at the Montreal Fringe, let alone a play one had written, and (yikes) at my age? I have directed in Latin America, in Toronto, in Colorado, in Nashville Tennessee and even at the Centaur. So what in the world am I doing with a brand new theatre company in the Fringe? It means starting all over again and investing money that I can ill afford, and yet…There are two other women playwrights who are self-producing this year. Perhaps it is a trend?  Maybe I just miss directing, TRIPLECROSS is a farce, definitely Fringe material.
There are considerably more women directors today than when I started out. When I graduated from Sir George Williams University there was one woman Director in this city and she was from England. It never occurred to me that this was unusual back then. In the sixties everything was designed and run by men. As a young woman I had been a member of a left wing movement and was treated just like the boys in my group, therefore I ended up directing a great many plays. When Norma Springford, who invented the theatre department at Sir George and therefore, Concordia, said that she thought I was a director, it seemed like the right thing for which to train.

The challenge for women in theatre has always been that the majority of Artistic Directors are men, who are rarely willing to take a risk on a woman Director’s vision. The companies which are run by women are usually designed to present the work of the women who run them, and so it goes. The few companies which do take this enormous risk are chronically underfunded, not surprisingly. Perhaps forming a new company makes sense in this context. 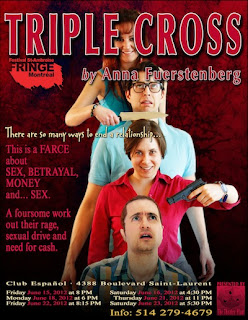 I have never felt that Montreal was the right place to start a theatre company until now. After almost six years of serving on the Board of Directors at the English Language Arts Network, I realized there has been a turning of the tide and this may be the best time to do it. Then there was the shift in my writing.  My plays have been produced in Latin America, the U.S. A. and the rest of Canada; somehow Montreal has not been receptive.
Most of my plays have a clear political thrust. TRIPLE CROSS is part of a trilogy of farces. They are intended to be outrageously humourous and a great deal of fun. Writers, like all artists do sometimes need to clear their palettes, much like painters. Using the bright primary colours of farce is a sort of aesthetic sneeze.
A farce is a play where every entrance and exit should merit a laugh. The heirs of Commedia Dell Arte should be happy and energetic, if not downright manic. Unlike the theatrical “warmity” (which is neither a tragedy nor a comedy but leaves you feeling warm all over) farce is fast fleeting and funny, or it isn’t working. The acting style is somewhat deadpan, like Brecht on speed, and the scenes should be short and sharp.
The hardest task in writing a farce is keeping the characters simple without being cliché. The most difficult task for the actors is letting go of all the method acting and allowing their inner comic to roll. TRIPLECROSS is pure unadulterated fun. It is the Anti-Chekhov; we have a gun and a knife on stage, but strictly as weapons of comedy. Come laugh with us.
Buy tickets
Posted by THE CHARLEBOIS POST at 12:04 AM