The Upstage Interview: Jane Gilchrist on Out of The Fog (Fringe) 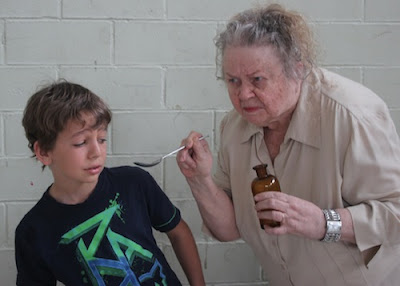 UPSTAGE:  Tell us about your play in the Fringe; Out of the Fog. You wrote and are performing in it.
GILCHRIST: It’s about school counsellors in both private and public schools. They do much more than they used to when I was a kid.
They try to help children improve behaviour, understand how to get along in society, and help them with their study habits. They have a lot more to do with the formation of the child than when they just gave tests and decided which academic fields they should pursue.
Vicki Barkoff is the counsellor and I am Georgia, the teacher determined to bring the children out of their fog of childhood. In other words, the first 11 years, a child is in the fog of childhood which protects them from the horrors of the world. Recognizing what’s out there can seem very daunting.
It’s Georgia’s theory that as they emerge from their 11th year and go into their 12th year, they must be able to judge the consequences of their actions, recognize the limits of their intelligence, and they must not be coddled. She thinks she must wake them up and tell them about the real world. The counsellor thinks this is abominable.
I used the device that I learned from my daughter years ago. She was in a class where the teacher had each child stand up and name his or her score. They were lined up against the wall in order of their scores. This was to show them they were in the middle, or very top drawer, or awful.
My daughter was in the middle and it made her angry to have her score read so she worked very hard that year and raised her score. She got up to 4th in her class but it was joyless. It wasn’t done to learn anything. I didn’t like that.
The counsellor and the teacher are debating this issue when they are interrupted by the news a child has been kidnapped from the school. They go all out to try to find the child.
It’s quite a realistic play in some respects. It’s not a clown show although there are some funny things that happen. (cont'd) 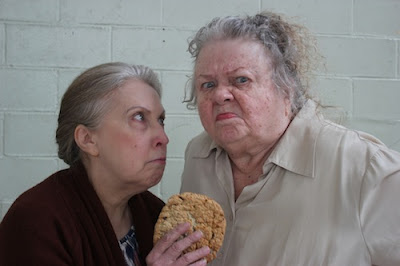 UPSTAGE: Is there something funny in the script you have in your hand.
GILCHRIST: It’s Georgia’s credo.

I welcome disputes. I reward logic with extra cartons of chocolate milk.

UPSTAGE: Will you read it for us.
GILCHRIST: Provided they stick to the topic at hand, don’t use foul language, and call me Miss Clark my kids can say anything they want  to me or their peers. I welcome disputes. I reward logic with extra cartons of chocolate milk. They must be able to support what they believe. And they must try to understand the worth of any counter arguments. Respect for those who express more logical and humane ideas than they do is something I want to cultivate in them. I hope they will come out of my class searching for serious competent leaders.
UPSTAGE: When did you write this play?
GILCHRIST: I wrote it this year. We wanted to do something where we shaped the story. We had talked about applying to the Fringe. I didn’t know but Vicki had sent in the application. Then I started to write a play.
We’ve had a workshop every Sunday since then with Jackie [Director Jacqueline Van De Geer]  when I would bring in pieces and we’d read them together. I wrote the words but they have been coached out of me by Vicki and Jackie.
Buy Tickets
Posted by THE CHARLEBOIS POST at 12:01 AM

Email ThisBlogThis!Share to TwitterShare to FacebookShare to Pinterest
Labels: fringe 2012, Jane Gilchrist, Out of the Fog