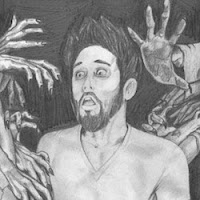 
A man enters an apartment covered in blood, out of breath and carrying a bloody shovel and quickly explains his situation: Montreal is overrun with zombies and he is one of few human survivors.  More in the tradition of “The Walking Dead” (AMC TV series 2010-present) than “Shaun of the Dead” (UK, 2004 comedy film) this show attempts to give a realistic portrayal of what it would be like to actually live through a zombie attack.  Without revealing too much, the main character (played by Adrien Benn) must sacrifice almost everything in his life to stay alive and survive in this new post-apocalyptic world.  While an intense, focused and engaging performer, Adrien Benn has written a play without a lot of actual tension and filled mostly with flashback scenes of exposition.  A lesson in killing zombies, pointing out that food and water are scarce and that life is terrible seem all done before in previous TV and film franchises about the ever popular zombie genre.  There is a great part of the piece, late, where insanity starts to creep in and a variety of zombie based TV programs are performed by Adrien, that are original, entertaining and wonderfully bizarre.  A strong use of video (with two old televisions) and a soundtrack that is both effective and at times very loud add to the tension of the piece as it goes along. Still in the end it is hard to truly believe in this show and the reality it is attempting to create but for fans of the zombie genre I’m sure it will be well worth the ticket price (especially if you show up as a zombie you only pay $3.00!).
Tickets
Rating: