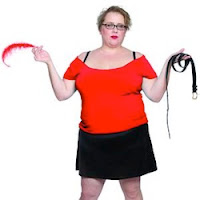 by Chris Lane
For those of you who were children in the 80s or 90s, do you remember those Choose Your Own Adventure books? Well, this works a bit like that, only instead of being a children’s adventure book, it’s a raunchy one-woman show about sex. Close enough.

Like the namesake novels, Moore does follow a script, so there is actually less improvisation and audience participation than you might expect. She occasionally asks members of the audience questions, so that we can decide which of her prepared segments will follow, meaning that there’s a different show every night. She talks directly to the audience, and is happy to break the fourth wall, just like how she likes to cross boundaries in the bedroom as well.


Moore is clearly very comfortable on the stage, and she smoothly incorporates the audience interactions, and successfully works in the occasional ad-lib. The show is essentially autobiographical storytelling, but Moore is quite theatrical in her delivery. She’s very likable, and keeps the audience at ease as she talks about the most intimate and explicit details of her own past and potential sexual experiences.
Moore encourages the audience to be more adventurous in their own sex lives, as she talks about things like fetishes and sex toys, but she is certainly not judgmental and seems to be a fan of sex in all its forms. Sex is clearly a topic that she could talk about for hours, so she easily fills out the hour-long performance with plenty of interesting anecdotes in this fun and bawdy production.
Tickets
Rating: