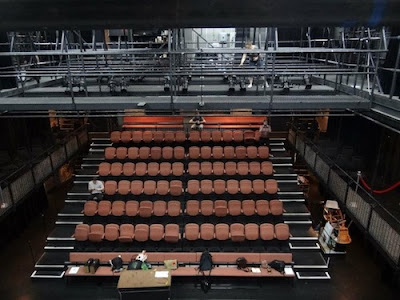 It requires a certain amount of madness to plan the premiere of your show to run simultaneously with two massive Theatre festivals. On one end, you have the Montreal Fringe festival with it’s wide-range of eclectic performances. On the other, you have the international appeal of the Festival Transamerique.

Right in the middle is Callistro The Great, a show that’s both eclectic and international (and as such will obviously satisfy the taste buds of every single audience member).

I am the co-founder of Brave New Productions, a creative outlet that I started 8 years ago with Marc Roth (who now runs our Toronto projects). It’s been a fun 8 years, but Callistro The Great marks a significant change in the size and scope of our projects. We’ve always been a Fringe-level production company, and now "Callistro" signals an opportunity for us to create in a different, bigger sandbox.

Luckily, it didn’t take long to see that, apparently, we had the same faith and concerns with the script

Fresh out of last summer’s Being Earnest at the Fringe, we were contacted by an outside producer to develop a script he had purchased the rights to many years ago. We hadn't even begun talking about what was next on our agenda when we were side-stepped by this great opportunity. Callistro took some warming up to on my end. It’s a dark political comedy set on a fictional island. Not necessarily a niche any of us knew a lot about.

I sat down with Emma McQueen to discuss the story and changes I wanted to make to it. We'd worked on a show together before and both felt comfortable being honest with our concerns. I shared my thoughts with our producer as well. The three of us couldn’t be more different and we all had different expectations for how we’d like to see the show develop. Luckily, it didn’t take long to see that, apparently, we had the same faith and concerns with the script, and so I sat down and set about adapting it for Brave New Productions. 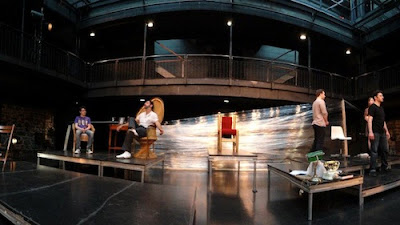 I found it very difficult to edit someone else’s work. I wanted to improve the flow of the story in certain points without changing the tone or direction of any dialogue. Callistro was an original script that, while having been workshopped in New York, still hadn't been finalized and continued to show opportunities for growth. No longer having access to the original author was also a challenge as so many points in the story were ambiguous and I wanted to keep them that way.

Once the three of us were satisfied with the rewrites, Emma, myself and David Reudelhuber (our stage manager) sat down to audition our actors. And, oh, the auditions we had. Over a dozen meetings took place over a two month period. We wanted to find great people for our show and as Dave and I quickly learned, Emma developed a very specific vision for Callistro; a great vision that required actors able to find a duality in their performances, able to hit the comedic notes of the story while never leaving the truths of their character or situation behind.

D.M. Bruce has retained 90% of his original script while I've been allowed to finesse and tweak Callistro to make it more easily accessible.

In the end, the show has been layered with the visions of many. D.M. Bruce has retained 90% of his original script while I've been allowed to finesse and tweak Callistro to make it more easily accessible. Finally, Emma and our actors have brought it all to life with nuances and attention to detail that make Callistro far more of a laugh out loud comedy than I ever imagined it could be.

Creating a project for someone else is a “something new” experience for Brave New Productions, though the reality is there’s been absolutely no pressure other than to create an enjoyable show. Every step of the way, we’ve received nothing but support and encouragement. There’s no better feeling for a director or producer.

I honestly feel that Emma, myself and Mr. Cohen can all sit back and find Callistro a thoroughly enjoyable show. If you knew how different the three of us were, you'd realize just how important that statement is. We have faith that the audience will leave the theatre feeling exactly the same way. So enjoy the Fringe and the Festival Transamerique, but don’t forget to stop by Monument National’s Studio Hydro-Quebec this week for the premiere of a show you don’t want to miss.