Review: Peter ‘n Chris and the Mystery of the Hungry Heart Motel (Fringe) 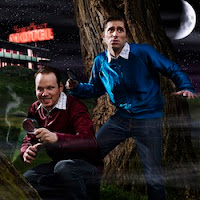 It’s a credit to Peter ‘n Chris’s deft comic ability that during their show, my mind drifted to the sad tale of the Butcher of Montreal only... twice. Last year, the improv comedians endeavoured to save the world. This Fringe, they’re on the run from a crazed killer in Mystery of the Hungry Heart Motel. Less a mystery and more of a bloodbath (killer’s identity revealed straightaway) this escapade involves dirty sheets, confetti vital fluids and lots of stabbing. But Peter Carlone and Chris Wilson are so smooth, so good, you’ll find yourself snorting the whole way, and not necessarily flashing back to the recent brutal murder of a Montreal student that has occupied people’s attention.  Peter and Chris crash their car and seek refuge in a creepy motel, whose poor denizens are at the mercy of a twisted killer. Cue lots of running on the spot. I understood that their show last year involved much more improv. Hungry Heart Motel is a tightly-knit tale, but Peter ‘n Chris’s fans might be disappointed by how much they stick to the page this time around, and all under an hour. The Vancouver duo, newly nominated for “Best Sketch Troupe” in the Canadian Comedy Awards, is sharp and funny, and is a sure bet. Buy your tickets ahead.