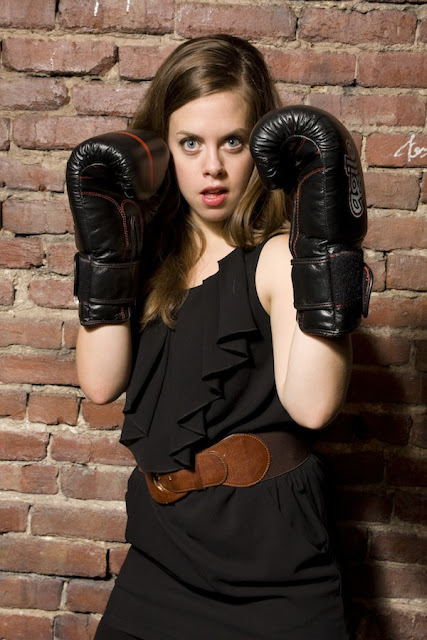 Writing a solo show is Tough!
Fighting it out for the Fringe
by Kirsten Rasmussen
If you are alone in a living room writing a solo show, and you laugh at yourself, does it mean it’s funny?
One week before I put Tough! up in Montreal for the first time this February, I was sitting on the floor of my living room in my apartment. I was finishing off my second pot of coffee of the day, and decided since it was after 8, I better switch to wine. (Ooh a delicious Dépanneur red, how becoming.).
I was staring at what used to be my living room floor which was now a thick carpet of paper. Scrap pages, loose leaf, journals, post-it notes, binders covered the floor, all with the word Tough scrawled somewhere on them.  In the middle, a large piece of paper with the title TOUGH TIME LINE written on the top, and an arc drawn across the paper. The arc of a story which is the visual metaphor of the cathartic journey the writer hopes one feels when watching her play.
"Seven days," I thought to myself and tapped the pen on my noggin as if I hoped it would unleash the creative genius needed to craft all this mess into a play. 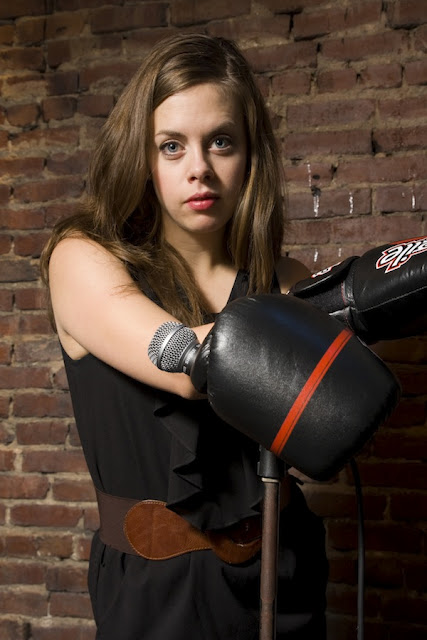 I first had the idea for Tough! in Summer of 2011. I was inspired to write a new show, but also exhausted from a very busy and intense year. To use the Theatre Sainte Catherine’s crew term for it, it had been a wild year of “GRINDING” and I was burnt out.
My plays usually start with some morsel of truth from my life and then I look for the characters and situations who can tell the story better and with more charm then just ol’ Kirsten standing in front of a microphone saying “GUYS, LIFE’S HARD, RIGHT?” (Which, by the way is basically what my stand up is like.)
Tough! Yeah, and it’s about, umm, it’s about when life is really hard

I’m going to call it Tough! I thought. (Having no idea, George F. Walker also had a show by the same name. Whoops. Well, mimicry is the best form of flattery, even if it’s ignorantly done, right?)

Tough! Yeah, and it’s about, umm, it’s about when life is really hard, and all you want to do is be cynical and give in to the rage, and be a dick, because it’s easier to do that than admit, yes this is Tough! and then keep on trucking with some optimism, some vulnerability and some humility. (So that's the morsel of truth. For my burnt out-edness had led into a raging dickishness on my part, or so I felt.)
In September I travelled to Edmonton for a friend's wedding, so I took that opportunity to produce Blink Blink Blink (my first solo show) in Edmonton and work during the day with one of my clown teachers on the conception of Tough!  He and I brainstormed and brainstormed what sort of physical metaphor could the message of the play take? And boxing kept popping up. I was hesitant because it was something I had never done and knew little about, but it seemed right for the show.
Nearly puked, every time I went for three weeks, nearly barfed all over everything.

So I got home to Montreal and started training at Le Chat Blue (a great co-ed boxing club in Mile-End)  WHAT A WORK OUT!  Nearly puked, every time I went for three weeks, nearly barfed all over everything. So many push-ups, so many everything. (Really a lot of push-ups.) And I had a huge realization that hitting someone is a lot harder than at first it seems. Especially when you've studied stage fighting. I kept punching across the person's shoulder and slapping with my hand on my thigh to make the hit noise.
So while I was learning the physicality of being a boxer, I was also inhaling anything boxing-related I could.  Watching boxing movie after boxing movie; all the Rockys a number of times; any documentary, article, whatever I could get my hands on, and then I’d watch Rocky again just for good measure.

In early December I hit a pretty hard writing block. I had been researching and studying for over two months, and I still had so many questions and little answers. Doubt ran amuck in my blocked head, and I asked myself such helpful questions as,


Why the hell are you writing a play about boxing?
Who's going to watch this?
Why don't you play another rodent character? People liked that. You dork!
Why aren't you good at anything practical in life, like taxidermy or something?
I freaked out and cancelled a reading I had planned on doing for invited guests. But, I kept training at the club, hoping that even if I wasn’t writing, maybe magically while I was punching the bag, the perfect play would materialize in my mind. I just needed the tiny beginnings of an inspired idea. 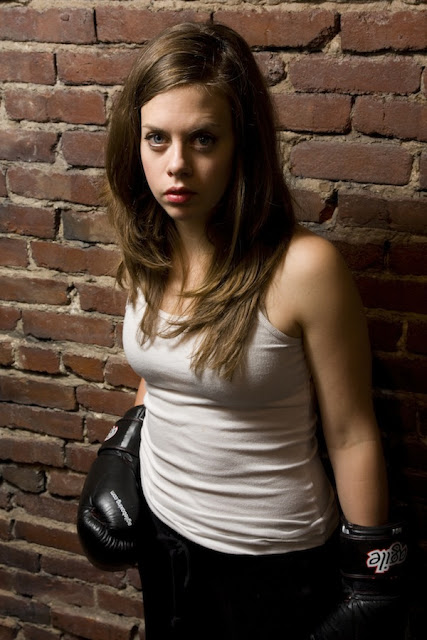 Two weeks before the holidays, I was at the Montreal Improv Theatre alone brainstorming for Tough! I was freaking out because I had nothing, and had myself a bit of cry/tantrum sitting on the cement. I am the youngest child of four, so a good tantrum comes naturally to me. And it was then a song came into my head. A song "Goodbye", I wrote it down as quickly as I could. And I knew that this was where the rest of the show would grow from. This one song. I didn't know what it meant yet, who it was sung to or about. But I knew it was part of the show. I had books filled with writing, but I knew this song would be the first thing I had written that would actually go in the show. I celebrated by walking home through a snowstorm, doing shots of whiskey with total strangers at the pub by my house, and singing the song as I whiskey-ly fell asleep.


Though I had found my "in" to the show with the Goodbye song, there was still much more to be done.


Flash forward two months to my living room. “SEVEN DAYS”. I tapped my head again. I opened the wine, "who needs a glass when the whole bottle is for you?" I said aloud to the papers on the floor.  I had four songs and most of the characters, but I didn't have an ending, most of the scenes were question marks, some of the characters just crude outlines, and it wasn't all fitting together as I had hoped.


About to tap my head again, I stopped myself. Just that week I had been punched in the face for the first time in my life. If that experience hadn't brought about a fantastic realization, I don't think a light tapping from a pen would. Though I finally understood what the phrase "Punch Drunk" meant, or was that jusr the shitty dep wine talking?


"There's a play here somewhere, I think", I pathetically reassured myself. I pieced it together best I could. Taping the scene-lettes onto the timeline; switching their order again and again with each swill of dep wine. Becoming  Frankenstein, and the play my little sewed up monster. I hope my creation doesn't kill me I said as I went to sleep with my lips painted dep wine red.

Becoming Frankenstein, and the play my little sewed up monster.  I hope my creation doesn’t kill me.

Five days later the play went up at Theatre Sainte Catherine; ready or not. I feverishly rewrote every night and every day before each of the “workshop” shows.  It was met with some success and some harsh criticism and lots of comparison to Blink Blink Blink that had just had its run at Centaur’s Wildside Festival. I felt like a protective mother; Blink’s  a year old  I’d say. Tough's just a baby, a little baby monster. And perhaps I admit a little premature.
After another big re-write, I travelled with Tough! to Adelaide Fringe, where it took on a whole new meaning. Being an international artist in a Fringe of nearly 1,000 acts; tough does not even begin to describe that experience. But still, it was amazing. (As was the wine tour I went on!) I did re-writes again almost every night in Adelaide, and was improvising new monologues and scenes, finding new jokes and assuring myself they were funny before stepping onto the stage for a small audience of 7 or 8 people. Each show was slightly different and by the end of my 12 show run, I felt I had found the arc of Tough! Even if I lost every penny I had put into this wild Aussie adventure, I had found something. There was a play here after all.
It’s a constant negotiation, constant work; you never arrive.


In Tough! the boxing coach says to his boxer:
“What you’d think it’d be easy, hey? You think you just wake up one day and you’ve got it? And then it’s there, forever by your side. That’s not what it’s like. It’s a constant negotiation, constant work; you never arrive.”
Tough! has been a constant negotiation. I hope what that means, is that it keeps getting better. Right now my living room is once again covered in paper. (Though no dep wine this time. Australia gave me a taste for good wine and I can't go back. Probably best not to be drinking much before the Fringe anyhow.)  I've been re-writing for the past month. And will probably re-write again after I open on Friday. And still have to reassure myself that it mostly makes sense, it's pretty funny. Then tape it back together, my little monster, to go back for another run at it. "Well she's a few months old now, so we'll see how she fares."


This run I am so excited to have not only the fantastic Jeff Louch (who also helped me create the music for Blink), but also Liam Tucker on bass and Tony Spina on drums.  A full band for little o’ me? I couldn’t be more excited.

As much as I love the solo creation process, I am really looking forward to getting Tough! out of my living room and onto the stage again.
Kirsten Rasmussen
Buy Tickets
Posted by THE CHARLEBOIS POST at 12:03 AM