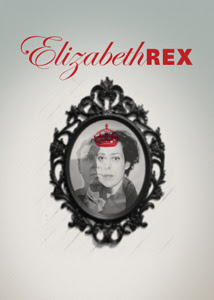 Last night’s performance of Elizabeth Rex was a kind of coming of age for Montreal Theatre. It is a fantastic script, written by the inimitable Timothy Findley, and directed with tremendous grace and extraordinary intelligence by two of this city’s finest directors. Mike Payette and Liz Valdez created a work that is wonderful for any audience, and has an added layer of insights for the lover of Shakespeare’s canon.

The imaginative story pits Elizabeth the first, brilliantly performed by Leni Parker against William Shakespeare, delightfully portrayed by Arthur Holden, and his leading man/lady, Ned. Brett Watson as Ned gave a tour de force performance that left the audience breathless and is worth crawling through the unbearable heat to witness.  The repartee is brilliant and the tension as they await the execution of the Earl of Essex thrilling.

Leni Parker was magnificent as Elizabeth

Warona Setshwaelo was terrific as the costume mistress. Howard Rosenstein was utterly delightful as the Falstaffian (neologism warning) Luddy. Lucinda Davis played Stanley a lady of the Queen’s entourage, and convincingly became smitten by the handsome Matt also well played by Lucas Chartier-Dessert. Olivier Perras convinced me that he was a bear; from the moment he appeared on stage he embodied this animal in a truly magnificent feat of acting. Paolo De Paola had fine moments on stage in his lamentations about ageing and the loss of his roles as a woman. Olivier LaMarche gave a very fine performance as Jack. The minor parts played by Ian Geldart, Irene Osprey, Jo Joffre
Aris Tyros were clearly defined and wonderful to watch

Leni Parker was magnificent as Elizabeth who donned the white make up to be a Prince and gave up her femininity to rule England. It was with great wit and delightful reference to the actual plays of Shakespeare that Ned challenges Elizabeth to become a woman and she matches this with a demand that Ned be a man. Arthur Holden brought to his interpretation of the Bard a sweetness and sensitivity which was heart breaking during his admission of an unfulfilled love.

We few, we lucky few who may see this amazing work during its terribly short run here will count ourselves among the most fortunate audiences in this city. It is criminal that this amazing work will not be running past July first, but if you must walk instead of running or crawl if you cannot walk, because the heat is so terrible do not miss this play!
Elizabeth Rex continues at the Segal Centre to July 1
Posted by THE CHARLEBOIS POST at 3:02 PM