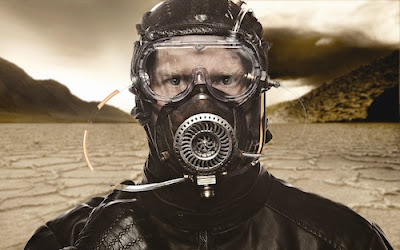 I like the stuff that is taken seriously. If you look at Ridley Scott’s Alien for example. Gritty, dark, intelligent.

Upstage Host Eric Sukhu spoke with playwright/director Paul Van Dyck, actors Eric Davis and Melissa Carter about The Harvester being presented  at the 2012 Fringe Festival. Below is an abridged version edited by Estelle Rosen, CharPo Editor-in-Chief.
UPSTAGE:   Seems like this time your play is in the sci-fi range. Tell us about The Harvester.
VAN DYCK:  It’s set in the very distant future. Oceans have shifted. Salt deserts cover the earth. A system has been developed of being able to suck time and light out of the surrounding atmosphere with machines and liquefy it so that time can be held in a bottle. That’s what’s been keeping  humanity alive for thousands of years. But it hasn’t worked out so well; only one man is left. And that’s Eric Davis, sitting right here. And Melissa Carter is here too.
UPSTAGE: What attracted you to this play Eric?

DAVIS: Paul had me at sci-fi play! He called me and said I’m thinking of doing a sci-fi play. Before he could finish the sentence, I said yes I’m there. We rarely see sci-fi on stage. I’ve always wanted to do sci-fi.
It’s not about the explosions of ray guns

UPSTAGE: Are you a sci-fi fan?
DAVIS: I’m a huge sci-fi fan.
UPSTAGE: Trekkies kind of guy?
DAVIS: No. What I find is that a lot of sci-fi degenerates into more comedic campy stuff. I like the stuff that is taken seriously. If you look at Ridley Scott’s Alien for example. Gritty, dark, intelligent. It’s not about the explosions of ray guns; those are elements but it’s really more about  concepts, extrapolating our future which I find very interesting.
UPSTAGE: Paul what was the origin of writing this play?
VAN DYCK: It started in University for a creative writing assignment to create a new language. I was writing a short story which turned out to be the type where you need a dictionary to understand it. It was set in the future. It was about this man who was able to build these machines to keep themselves alive forever.
To turn it into a play, I wanted a more concrete theatrical structure, so I borrowed from the classics. It’s actually an allegory of the story of Lot from the Bible. You probably wouldn’t notice that on first watching but if you wanted to study all the allegorical details you’d find some.
Sci-fi helps us put stories in context by taking us out of our real world, allowing us to see the potentials.

UPSTAGE:  What is the attraction to sci-fi?
DAVIS: I think it’s seeing where we could possibly go. Sci-fi helps us put stories in context by taking us out of our real world, allowing us to see the potentials.  We can talk about concepts that are close to us in our present day but it’s always great to be able to play around with concepts on the fringes of our reality. What  happens when we make that leap and start colonizing other planets? What  happens thousands of years down the line? Is humanity even going to be around?
UPSTAGE: How was working  on this different from other plays Paul?
VAN DYCK:  Because a lot of science fiction is based on cinema with lasers and lights, had to work out how to get rid of the bells and whistles for the stage and concentrate on the characters.
UPSTAGE: How do you make it real for people to relate to it?
DAVIS: It’s like Paul said, it’s not about the bells and whistles it’s about real relationships between humans involved. Can’t base it on pretty lights and linking consoles. I have to say, as an actor,  it’s a bit of a leap to get my head around the fact that my character is going to live hundreds of years. I have nothing to draw from.
I love sci-fi. Sometimes I wish it wasn’t so glum.

UPSTAGE: How do you do that?
DAVIS: I use my video gaming. I’ve been to all these virtual worlds. If I contextualize that, I can think about all these different adventures I’ve had.
UPSTAGE: What about you Melissa?
CARTER: I was living out West and took a break from theatre doing TV and film. This is my first venture since I’m back. I love sci-fi. Sometimes I wish it wasn’t so glum.
Buy tickets
Read also: Barbara Ford's profile of Paul Van Dyck
Posted by THE CHARLEBOIS POST at 12:01 AM