EVENT: The No Bull$#!% History of Canada (Fringe) 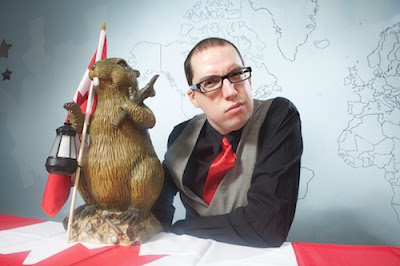 The House of Style gives Canadian History its BALLS back.
April 2012 – Kyle Allatt believes not only is the truth stranger than fiction, but also that truth is funnier and more interesting. As a child he was required to make his family tree as a class project.  He somewhat misunderstood the scope of said project and in the course of his research (which now reached back into the 15th Century) he discovered he was related to Charles Tupper, a former Prime Minister.  20 years later, Allatt decided to look his prestigious relative up and what he discovered was fascinating. Tupper was not only Canada’s shortest termed PM at only 69 days, but also by far, Canada’s WORST, or at the very least, funniest, Prime Minister.
While the original piece was going to be solely about Tupper, Allatt’s further research allowed him to collect other interesting and whimsical stories throughout Canadian History. Collection in hand he has now woven together the hour of nonstop educational hilarity that is The No Bull$#!% History of Canada. This comedic romp through Canada's History comes to Espace 4001 Space as part of the 2012 Montreal Fringe Festival.
Kyle Allatt has been actor for the past 25 years. He had spent 4 years writing and performing with the Montreal sketch comedy troupe “The Dancing Cock Brothers” (2006-2010), co-hosts 2 local podcasts “The Gung Horse Podcast” and “Rock Over London, Rock on Chicago” and has been featured in many commercials, television shows and films over the years (including bit parts in “Secret Window” (2004) opposite Johnny Depp and “Source Code” (2011) with Jake Gyllenhaal). Allatt has always been interested in comedy, history and the notion of failure as it relates to historical events.
Follow along on twitter with #noBSHoC or follow the Tupper the Beaver's adventures:
http://the-house-of-style.tumblr.com/