EVENT: The Little Prince as Told by Machiavelli (Fringe) 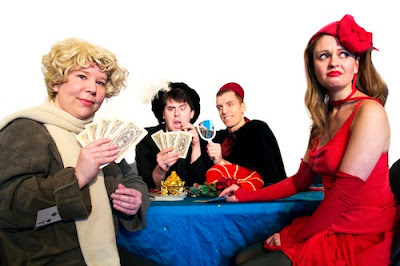 The Little Prince as told by Machiavelli

A Fringe Festival production showing at the MainLine Theatre (3997 St-Laurent) on these dates:

http://montrealfringe.ca/en/show/little-prince-told-machiavelli
The Little Prince by Antoine de Saint-Exupéry is a charming, whimsical, slightly melancholy children's story about love, loss, loneliness, and a wistful philosophy of what is most important in life. It has captivated young and old alike for generations.

The Prince by Italian statesman Niccolo Machiavelli is a brutally pragmatic analysis of political realities during the most dangerous, cutthroat era of Italian history: a book whose advice to rulers was so cunning, so ruthless, and so completely amoral that it horrified even the Borgias.

At this year’s Fringe, freshman company Capricornucopia presents The Little Prince as told by Machiavelli, combining these two enduring masterpieces to produce a charming and whimsical story of brutally pragmatic political realities, told with childlike wonder and ruthlessness!

Join the Little Prince as he travels to different planets (those big flat disks in the sky that the sun revolves around), meeting funny new people and subjugating them! Watch as he cleverly employs Machiavellian techniques — flattery, treachery, blackmail, deceit — to exploit their flaws and establish his own iron-fisted rule. Through his enchanting adventures, the Little Prince explores issues that are close to the hearts of all little princes and little princesses:

...and many other questions all children ask, each illustrated so simply and clearly that even grown-ups will understand!

Whether you are contending with the Papacy and the Duke of Ferrara to unite all Italy under a single banner, or just want to be top dog in kindergarten, The Little Prince as told by Machiavelli provides timeless lessons in dominance to ensure your long and prosperous reign.