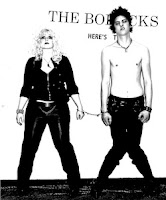 A few decades down the road, Sid and Nancy now seem like they are from a different age. How else would you explain the Vicious Circles program, chock-full of explainers mapping out their tragic tale? Well, if you either didn’t experience their story, or you just don’t remember it, their punk plight is being recounted viscerally by a trio of young actors. Punk groupie Nancy Spungen was found dead in a Chelsea Hotel bathroom in 1978, a stab wound below her navel, while her Sex Pistols bassist boyfriend Sid wandered the hall in a drug haze. Accused of her murder, he later died from an overdose, and there have been interpretations of their punk ballad ever since. This version, written by Ben Kalman and directed by Stéfan Cédilot, is a bit of a rambling mess, with characters wandering in and out and frequently passing out. Granted, this is not linear storytelling, but the tension failed to come to a crescendo. And at 75 minutes, this punk project goes around in circles, begging for some razor cuts. Sid (Patrick Rogers), Nancy (Kathleen Aubert) and Johnny Rotten (Sebastian Samur) are interpreted to a t. (Pretenders singer Chrissie Hynde said of Nancy, “When she started up that incessant whining she was more than the human mind could bear.” Aubert does this to perfection.) The music and strewn garbage onstage hits the right note. And the accents? I found them passable, but I have it on good word (aka a British friend who caught the Fringe-for-All) that they may be a deplorable Cockney mess to those with the finely-tuned ears. To conclude, I’d like to pay homage to the program blurb: sex. drugs. loud music. screaming. go. if. you. can. handle. screaming. vicious. circles.