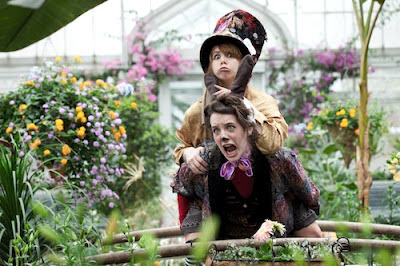 Part IV
From Wishful thinking to Wonderland
by Scott Humphrey
As I contemplate how to start this part of our blog, I’m trying, and failing, to get glitter out of my hair and off my face. “A lot can happen in a very little amount of time”, a very important person once said… or was that me? At any rate, last night was the magnificently zany annual summer-time theatre promo event, the Fringe-for-All! We, the actors taking part in Alice’s Adventures in Wonderland, did a relatively well-received two minute segment where we danced around (in character), and then got brutally slain one by one, courtesy of the Queen of Hearts and her Knave. Oh, and our deaths were accompanied by blood-coloured glitter bombs. “Cute”, “raved” one reviewer. Well, as my father would say: “You can’t win ‘em all!” Sigh… Often he would be grinning while pronouncing the maxim, preparing to step into the lions’ den. (He was a professional lion catcher. Was. He found a less taxing job in accounting shortly after.)
“Did I really get here from a first reading in only a couple of weeks?”

The reason I bring up the Fringe-for-All is that I had an out-of-body moment last night. I stepped back, saw my body contorting wildly to the music, and dying its tragic death, and thought to myself: “Did I really get here from a first reading in only a couple of weeks?”
Creation is a curious thing: it happens in both an instant and over prolonged periods of time. These posts are supposed to reflect my “actor’s process” from beginning to (almost) end on this production, but instead I find myself struggling to define what I actually do for a living. The last time we spoke (or I wrote meandering thoughts and you read them), I was painting a picture of me at home, alone, imagining the way my characters would do things. (Not that I lead a lonely life. Far from it… Ask my cats!) Oftentimes, I would come to rehearsal with some pretty strong ideas of how these characters, like Humpty Dumpty, might play out, only to slash them wholesale when actually trying them with another living, breathing human being playing right back.
It’s right there, if only you commit to the topsy-turvy world of Wonderland.
These last couple of weeks have had a simple goal, yet a difficult execution: how could this moment (whatever individual moment we were looking at) be more real? The illogic of the majority of the Wonderland characters means I don’t have to go looking into the dismal woods of “slapstick” for the comedy inherent to the play. It’s right there, if only you commit to the topsy-turvy world of Wonderland. Which is, of course, the real treat for me.
An additional not-so-little joy that I have on this project is the construction of props and costumes. Typically, I rely on designers and dressers almost to the point of feudalism in order to prepare my world for me, but this time around, all the props, costumes, masks, and puppets, are being built by us (or bought, but that sounds less exciting). No longer do I come into contact with a piece of the theatrical world, only to have to incorporate it into my very personal vision of the universe I live in… now it comes straight out of it! This all sounds like I’m building Cirque du Soleil’s new show. Not in the least! I’m just not a very “crafty” person, and thus am taking huge pride in making something a 4th grader wouldn’t hang on the Christmas tree.
But, all that said, we are still approaching the moment for a monumental meeting of worlds, and the Fringe-for-All was only a small taste of what the English- and French-speaking theatre, dance, and other artistic companies out there have in store. Should you come and see me in Alice’s Adventures in Wonderland? Of course. Should you take in the Fringe, regardless of what you just promised? It’s a no-brainer!
Buy tickets for Alice's Adventures in Wonderland
Posted by THE CHARLEBOIS POST at 3:01 PM