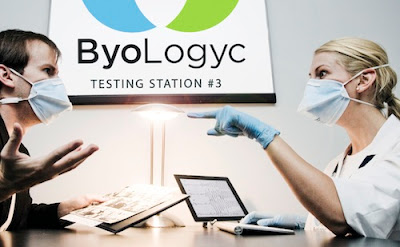 ALL YOUR THEATRE NOW BELONGS TO YOU
joel fishbane
Fringe Festivals have long been a unique way to tap into the zeitgeist and this year’s Montreal Fringe was no exception: there were four shows about the end of the world, three of which involved zombies. At least one show at the upcoming Toronto Fringe will continue the trend, although exactly how remains to be seen. Zed.To, produced by The Mission Business, looks like it might be another zombie-flavoured night at the theatre. A piece of immersive entertainment, its plot actually started way back in 2009, threatening to give new meaning to that old writing technique of starting a story in medias res.
To understand the show, I caught up with one of its creators, Elenna Mosoff. The  artistic associate producer of Acting Up Stage Company, Moseff was most recently seen celebrating the company's accomplishments at the  Dora Awards (for their productions of Caroline, or Change and Ride the Cyclone). But she hasn’t had much time to admire the trophies – she’s too deeply immersed in another, more pressing narrative.  Since 2009, Moseff and her partners – local hotshots David Fono, Martha Haldenby, Trevor Haldenby and Byron Laviolette – have been crafting a theatre event that involved the creation of an online universe which will have direct consequences on the theatrical experience being planned for the upcoming Toronto Fringe.
the team behind Zed.To are creating a show in which an audiences influence the narrative itself

“We are curious about what happens when artists and strategic thinkers collaborate in story making,” said Mosoff in an email. Together, the group hopes to challenge the very format of theatre by “bringing people towards the unknown by testing unknown waters of connection.”  Developed through a series of workshops and creative retreats, the project is being funded by a $20,000 Indigogo campaign that included high profile supporters like Margaret Atwood.
More than just interactive entertainment, Mosoff and company are working to become the theatrical equivalent of a role-playing game. In many examples of immersive theatre, audiences wander the world of a story (usually inside a house or converted warehouse) and choose what they want to watch. Mosoff was interested in taking this a step further. Much like the deeply engrossing worlds of video games like World of Warcraft, the team behind Zed.To are creating a show in which audiences influence the narrative itself.
Then we began discussing 'the problem of the zombie'

And what exactly is this narrative? Provoked by the book World War Z  (about a UN worker who collects tales from the survivors of a zombie apocalypse), the team began to discuss the ideas of survival and community. “Then we began discussing ‘the problem of the zombie,’” said Mosoff, “which to me was that I wasn’t interested in exploring the ‘camp’ medium.” This led to their central concept: the creation of a fictional biotech corporation who are threatening to, directly or indirectly, bring about the end of the world.
That company, ByoLogyc, has its own website, CEO, interns, supporters and products, like ByoEnrich, a patch that releases vitamins directly into your blood. But the protest site Byoleaks has sprung up to complain of the company’s quietly nefarious practices. The site claims that ByoLogyc has “created a dangerous and unsustainable situation.”  Meanwhile CEO Chet Getram – a notorious recluse - has hinted that a revolutionary project will be unveiled at the VIP Launch Party – which coincidentally happens during the Toronto Fringe.
How do you become a VIP? Simply show up the Annex Wreckroom in Toronto at 7:20 on July 4th. There, a team of ByoBabes will provide you with a VIP badge and assign you to a particular department inside the company. Inside, you will meet your “department head” and orientation begins. Orientation, I should add, involves drinks and something called “drug trial samples.”
Everyone wants to be the star of their own story

From here, Mosoff became wary of giving away too many details. Apparently something may happen at the launch party – and that something may have already occurred. A recent visit to the Byologyc website brought me to the mysterious phrase: “All Your Genome Are Belong to Chet.” Mosoff told me that I caught the site in a moment of "narrative hacking" though she's been enigmatic about what this means - or what its relevance to the larger story arc may be. Suffice it to say the story keeps changing - by the time you finish this article, it may have already shifted again.
Still, whether or not the world actually ends during the Toronto Fringe may be something that’s entirely in the audience’s hands. “Everyone wants to be the star of their own story,” Mosoff remarked. “That’s what the social media outlets provide….immersion allows an audience to become co-creators. That is why immersive theatre is necessary – we all want to feel invested in something.”
For more information about the project, visit www.zed.to. To enter the world of the story, visit www.byologyc.com and sign up for their Versatile Intern Program here.

For more articles about the Toronto Fringe visit our special index.
Posted by THE CHARLEBOIS POST at 12:01 AM