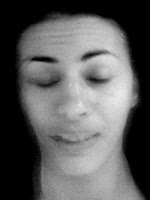 “Do you have children? That’s what life is all about, you know.” And so this production presents the disappointment, difficulties and frustrations of a married mother bringing up her one child who happens to be autistic. In this case it appears to be an upper middle class mom: she handled $20 million accounts, imagined her child going to Harvard, and was at some point promised an “island paradise” by her husband. Her husband doesn’t seem to be helping much now though, being too busy with his high-powered job and, as we find out, nor is our provincial government (unlike Alberta’s because of their tar sand revenues apparently). Don’t expect any support from the mothers of other kids either. And there are strict schedules to be followed and foods that can't be eaten.

I can’t imagine the many wrenching challenges that arise with the profoundly traumatic accidents and ills that befall many of our children. This production gives somewhat of another glimpse into that though I think more so into, albeit unintentionally, the diminished prospects of those families who are economically marginalized … and the wholly unique perspective of those of us who ostensibly have it all.