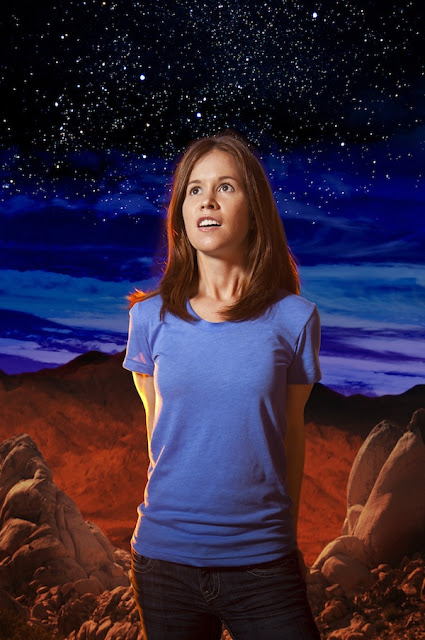 AN UNENLIGHTENED CONVERSATION WITH ELIZABETH BLUE
joel fishbane
I met Elizabeth Blue a year ago but she still hasn’t met me. Such is the life of the actor: you perform a series of quirky quasi-autobiographical monologues and people start thinking they know you better then their own friends. Hoping to avoid embarrassment in case we bumped into each other on the street, I decided to contact her when I saw she was returning to the Fringe Festival – along with her new show One Week with the Shaman. I’m happy to report that now we’ve properly met - or at least as properly as anyone can meet in the digital world.
“I got into performing as a junior in high school,” Elizabeth Blue wrote in an email, no doubt sent from some quaint café in the heart of Manhattan. “I got the extra role in Into the Woods – Milky White the cow, a role previously given to a stuffed animal.” Apparently the role was such a hit that people to this day call her Milky White. “That cow really opened up doors for me,” she added.
“I go on a week-long spiritual adventure hoping it will get me a career and a boyfriend, but instead I find out I’m totally full of shit.”

Last year, under the guise of her one woman show Am I Blue – Elizabeth Blue / Milky White played a nameless New Yorker who practiced “boyfriend visualization” and attempted to help housewives unleash the “cupcake decorator within”. It was a deft satire on the Western world’s quest for the quick fix and it looks like she’s continuing to explore that theme. Asked to describe her new show in fifteen seconds she replies: “I go on a week-long spiritual adventure hoping it will get me a career and a boyfriend, but instead I find out I’m totally full of shit.”
Like Am I Blue, there’s something of Elizabeth Blue at Shaman’s heart. “I did seek a shaman,” she told me. “It wasn’t at all what I expected and it set me off on a different path….I finally began asking different questions.” Her email skipped a line, the digital equivalent of taking a pause. “Does that make any sense?” she asked. “Or am I speaking in spiritual-babble?”
Asked to describe herself in one word, she summed herself up succinctly with “unenlightened”. That’s Elizabeth Blue: chock-full of wit and unanswered questions. She came to the solo show circuit after falling in love with the genre in college, where she wrote two shows of her own - God is Laughing at Me and Grabbing the Coconuts. Neither made it past a staged reading but the gestation period was what she needed to create Am I Blue, which toured the 2011 Canadian Fringe. In Montreal, the show was nominated for the Just For Laughs Comedy Award and Centaur’s Best English Language Production.
Elizabeth Blue wanted One Week with the Shaman to have the seamless element of a more crafted show.
That time around she received “accidental” help from director Maia Garrision. “I took her to lunch,” said Elizabeth Blue, “and I kept asking her to look at my scenes until finally I asked her if she would be up for directing the whole thing,” With Shaman, though, she wanted to bring in another director who would “get into looking at the piece as a whole.” Where Am I Blue was an improv-based comic monologue, Elizabeth Blue wanted One Week with the Shaman to have the seamless element of a more crafted show.
Enter Adam Knight, one of the founders of Slant Theater Project. “We just hit it off immediately,” she wrote. “I found out he was a director / director (as opposed to an actor / director)….He’s incredibly intuitive and smart and funny – and very patient.”
It remains to be seen whether Adam Knight proves to be a more helpful shaman than the one Elizabeth Blue visited once upon a time. Still, there’s every reason to hope that One Week with the Shaman will be another success. She’s a comic actress who knows her way around a monologue. And her history has demonstrated an impressive devotion to her craft. She’s in a constant state of collaboration as she searches for the input of others – in her quest for artistic shamans, her professional life mirrors her personal one. Unenlightened as she may be, Elizabeth Blue is certain of at least one thing: life isn’t a solo venture, even if you are the only one on stage.
Incidentally, she’s already changed the title of her show: for those Fringers in Winnipeg and Edmonton, look for a show called Unenlightened.
Visit Elizabeth Blue at www.elizabethblue.net. One Week with the Shaman plays at the Montreal Fringe Festival in Venue 3. Six shows only, check www.montrealfringe.ca for showtimes.
Read Elizabeth Blue's first-person piece about her show
Show details

OTHER FRINGE NOTES
I received plenty of angry notes last week after I did my Fringe preview plugging only those shows that featured my friends. Apparently I have more friends then I knew about and none of them appreciated being snubbed.
Allow me to correct the error. In  planning your Fringe schedule, you may want to consider Edward Bond’s The Tin Can People, a hit of the 2011 Edinburgh Fringe, which features my friend Davide Chiazzese (Venue 10); Hippolytus which features Johanna “My Pregnant Brother” Nutter (Off-Venue D); fellow playwright Ned Cox’s A Ghost Story (Off-Venue B); and Falling Open, which takes place in my friend Lib Spry’s living room and asks the eternal question: if your childhood doll could talk, what would she say? (Off-Venue E).
Posted by THE CHARLEBOIS POST at 12:01 AM