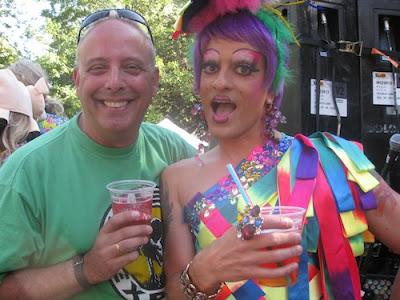 Fringing with Richie Bitch
Some pretty amazing stand-up comics have come out of Montreal over the years and one of the best is legendary drag queen (and Fugues magazine columnist) Mado La Motte, so-called because patrons at Poodles’ nightclub on The Main in Montreal way back in 1987 thought she was so ugly they dubbed her “The Mutt.”
by Richard Burnett (reprinted from Fugues with permission)
Thus, Mado ‘La Motte’ was born.
“She looks like a clown!” my six-year-old brother Skye told me as he pointed to Mado at his first Gay Pride parade in Montreal over a decade ago.
When I told Mado about it afterwards, she replied, “He’s right, I am a clown!”
Mado – a.k.a. former UQÀM theatre student Luc Provost, who quit university two credits shy of a bachelor’s degree – got her start as a shooter bitch and cigarette girl at Poodles and Club Lézard. The rest, as they say, is history (or in Mado’s case, Herstory).
“When young children walk past Cabaret Mado they always point to Mado’s statue,” Luc told me once. “One time a child said, ‘Look at the clown!’ And his mother explained, ‘No, that’s a drag queen.’ But children are the first to recognize what drag queens really are. We are clowns.”

And none of them is funnier than Mado.
The French-speaking Mado is lightning-quick on her feet and absolutely slayed the mostly anglophone audience with her deliberately butchered English at her 11th annual Drag Race at the Montreal Fringe Festival last summer. I was a judge at the drag races that year and Mado – bless her heart, the tramp – redubbed me “Richie Bitch.”
Mado is back this summer with her 12th annual Drag Race and it is bar-none the most popular, best-attended event at the Montreal Fringe Festival, which this year runs from June 4-24. Over 60,000 theatre-lovers are expected to attend over 700 performances (French and English) by more than 500 theatre, comedy, dance, music and visual artists.
Here are my choice picks for this year’s edition:
Drag Races / La course en drag A dozen drag queens to celebrate a dozen years! Mado Lamotte hosts this knock down, drag-out battle royale pitting Montreal’s best known professional drag queens against a bevy of FRINGE Beauties in a series of skill-testing obstacles at the Fringe Parck at Parc des Amériques (Central Box Office, Outdoor Stage, Beer Tent) on The Main. June 16 at 4 pm. 120 minutes. Free admission.
FUCKING STEPHEN HARPER: How I Sexually Assaulted the 22nd Prime Minister of Canada and Saved Democracy Written by Rob Salerno, who is also a news journalist for Xtra. Promo for this play – which got raves in Winnipeg and Victoria – reads, “We’ve all heard journalist Rob Salerno ‘sexually assaulted’ Stephen Harper. Now hear Salerno’s side of the story at this signing of his tell-all memoir, which Maclean’s calls ‘an hilarious tale of Canadian politics and what Stephen Harper’s balls feel like.’” At Petit Campus (57 Prince Arthur E), June 18-24. Runs 60 minutes. $10.

God Is A Scottish Drag Queen Written and directed by Mike Delamont, CanWestNews says of this Victoria Fringe Best Solo Show winner, “A Cross Between Dame Edna and Billy Connolly with a dollop of Eddie Izzard.” What’s it about? God, Dressed in a floral power suit, skewers everything from Bieber to the Pope. This show has sold out all of its Canadian performances to date. At Cabaret du Mile-End (5240 Parc Ave.), June 16-24. Runs 75 minutes. $10.
If Looks Can Kill...They Will!  I love the “kids” of Montreal’s terrific Glam Gam Productions crew who’ve long been putting on funny, sassy, racy shows – often with eye-popping nudity –  at Montreal’s Café Cléopâtre. Well, they’re back with a new comedy/ musical theatre/cabret show. Their promo reasds, “Ever since polyamorous lovers Sarah, Michael and Julie invited members of their Glamily over for a burlesque dinner party cabaret, tensions have been rising on set… as has the body count! Help sexy Sherlock Homo and Dr. Hotson solve this mysterious case!” Written, choreographed and directed by Glam Gam Productions, June 8-16 at Café Cléopâtre (1230 St-Laurent). Runs 105 minutes. $10.
Hippolytos Euripides’ play about desire starring the hugely-talented Antonio Bavaro in drag (you may know Antonio’s drag alter-ego Connie Lingua performing at queer nights like POMPe Thursdays at the Katakombes co-op on The Main, or for his widely-acclaimed performance in Hedwig & The Angry Inch at last summer’s Fringe fest). Written by Euripides, translated by Carina de Klerk, Lynn Kozak and McGill Classics, and directed by Carina de Klerk and Lynn Kozak, the promo reads, “Hippolytos doesn’t like sex, or the sex-goddess Aphrodite. But he’s about to learn you don’t mess with that goddess. Come see this all-new English version of Euripides’ play about desire, set in a club with original techno music. If you go out clubbing with Aphrodite, who will you fall for?” At Le Gymnase (410 Rachel E.) from June 15-23. Runs 110 minutes. $10.

Montreal Roller Derby If you’ve never attended this rock ‘em sock ‘em league of kickass chicks battling it out for real on a flat track, then do NOT miss this special Fringe battle royale, featuring two match-ups: New Skids On The Block vs Suburban (Steel City Derby Demons) at 6 pm, followed by the Fringe Half-Time Show, and then Les Contrabanitas vs Derby Debutantes (GTA Rollergirls) at 8 pm. With hosts Plastik Patrik, Single Malt Scott, FLQ and Private Stacks. June 9 at Arena St-Louis (5633 St-Dominique) beginning at 6 p.m. Runs 180 minutes. $10-15.
It’s important to remember that the Montreal Fringe Festival is an awesome launching pad for theatre, comedy, dance, music and visual artists – over 500 just this year alone.
Montreal writer Steve Galluccio – who wrote the hugely successful play Mambo Italiano before adapting it for the screen – famously got his start at the Montreal Fringe in 1991 (his several Fringe plays in the early-‘90s included spoofs of The Brady Bunch and Batman and Robin).
“I’m proud to be a Montreal Fringe alumni,” Steve told me when he was named official spokesperson for last year’s festival. “It’s a great place to start your career, an amazing platform to learn how to do it all. I was there the first four years, from 1991 to ‘94. I learned how to put on a play with no money; I learnt that sets aren’t important – it’s what you put onstage that counts. I grew up in front of an audience. Sometimes they’d like something, sometimes they didn't, and I’d make changes. I learned to sell myself – which is so important – and get people into the theatre.”
This year’s edition of the Montreal Fringe Festival runs from June 4-24 at various venues. Advance tickets are recommended. For all shows, times and venues, surf to www.montrealfringe.ca.
Happy Fringing!