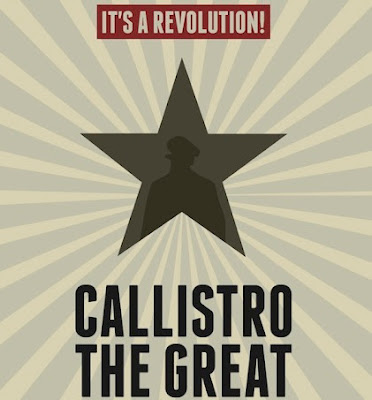 Between the Fringe and the Infringement falls the “Independent”.

Callistro the Great opened last night for a very short run at the Monument National. The play may actually have been written in the nineteen eighties, inspired by events in Central America, Argentina, Brazil, and Chile.

The fictional Island country of San Miguelo is a banana republic where a terribly stupid dictator and his illiterate Generals and corrupt Ministers live to exploit the poor and mete out injustice. One Minister in particular stands out, Salone, played with great courage and presence by Sean Curley. Salone is commanded to raise fourteen million dollars from the impoverished nation or the President threatens to do unspeakable things to him. When he fails to secure the money from the Island's only wealthy person, Salone devises a nefarious plan.

This might have been an inoffensive little play, reminiscent of Woody Allen’s Bananas, (although not as amusing), if it had not actually happened.

For those of us who remember the Iran Contra scandal, the plan is not far from reality. Salone intends to send airplanes to a Middle Eastern nation on behalf of the U.S. which cannot be openly seen to do so. In return San Miguelo would receive better planes from the U.S. The logic is that San Miguelo is threatened by the Communist scourge.

This might have been an inoffensive little play, reminiscent of Woody Allen’s Bananas, (although not as amusing), if it had not actually happened. See Guatamala and the genocide of Mayan people who could not even read Spanish let alone understand Marxist economics. The billions of dollars spent by the Americans in support of the Contra who terrorized and slaughtered innocent Nicaraguans, also come to mind.

The actual script did not have a clear point of view, political or comedic, and even its attempt at satire was terribly dated in the era of Haliburton and Iraq.

Apparently the Producer was enthusiastic to have this script mounted. The question remains, why didn’t  it get the dramaturgy it most certainly needs?

Every production requires a great deal of time and effort from a great many people. This production at the Monument National also cost a significant amount of money. After watching the merciless stereotyping of the Latino, in the broadest and most disrespectful terms, one has to ask why this company bothered at all.
Callistro The Great continues to June 17
Posted by THE CHARLEBOIS POST at 3:29 PM