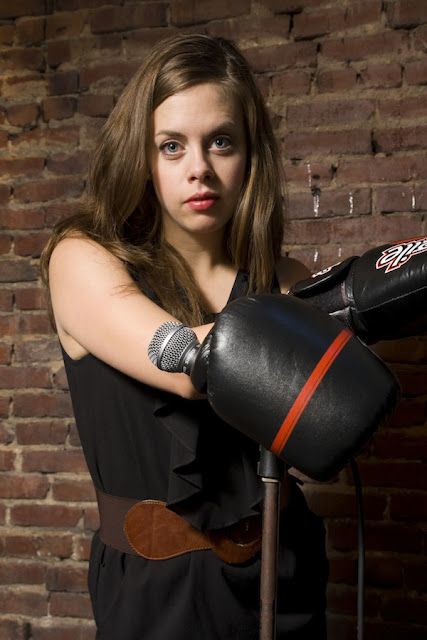 Tough!
A solo musical comedy by Kirsten Rasmussen.
Ding Ding! In the left corner is award-winning comedian Kirsten Rasmussen and in the right corner… Kirsten Rasmussen? A solo physical comedy with as much heart as it has laugh out loud moments. See what happens when a lounge singer with a troubled past goes toe-to-toe against a boxer with a bright future. Through punch combos and sweet songs, this hilarious tale exposes what it truly means to be Tough!
With live music from one of Montreal’s finest jazz trio under the direction of Jeff Louch.  The songs will have you dancing in your seats!
Kirsten Rasmussen is an award winning performer and writer, she was a co-founder and director of Montreal Improv Theatre, and is 1/3 of the new Host Troup for L’Apres Fringe, 13th Hour Talk Show. She has been nominated two years in a row for Just For Laughs Best Comedy at the Montreal Fringe, for You & Me and Me & You in 2010, and Blink Blink Blink in 2011. Blink won the Best of Fringe Centaur Award in 2011, and was also nominated for a MECCA for Best New Text.  Kirsten also tours improv extensively and recently received Best Improviser at Vancouver International Improv Festival in 2011.
Her shows combine aspects of improv, sketch, and song to deliver their fast paced comedic blows.  Highly physical and somewhat dark, her tales will make you “laugh to tears.”*- Montreal Mirror.
Tough! Playing at Venue 5 - Cabaret du Mile End
Friday, June 15 18:00
Sunday, June 17 23:00
Wednesday, June 20 18:00
Thursday, June 21 20:00
Saturday, June 23 23:00
Sunday, June 24 14:30
Contact: Kirsten Rasmussen
www.kirstenrasmussen.com
kirsten.marie.rasmussen@gmail.com
Twitter: KikiRazzle