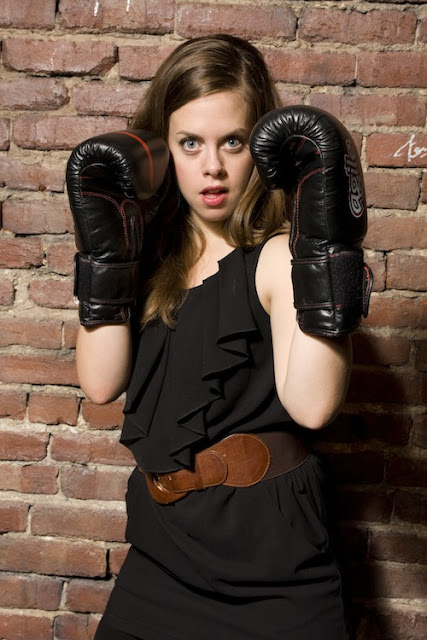 Rasmussen
Visions of a Fringe-to-Be
Top 10 Highlights of the Fringe for All
by Rebecca Ugolini
Stilts, bunny costumes, burlesque shows, and roller derby: this couldn’t be anything other than the 22nd annual Montreal Fringe Festival. Over 90 artists presented their 2-minute show pitches at the Festival’s preview event Fringe-for-All, but facing such a variety of choices can be intimidating. To preserve your sanity and prevent you from ending up in a bunny costume of your very own by the Festival’s end, here’s The Charlebois Post’s Top 10 Highlights of the Fringe-for-All, an assortment of spots that caught our eye amid many fine and interesting choices.
For show dates and times, check out SHOWS at www.montrealfringe.ca.


10) Le Papier Sec’s Le Doigt promises a suspenseful and provoking telling of the story of a metro shooting, the intrusion of tragedy into everyday life, and the link this violence creates between two men who witness the attack.
9) Right Now!’s Jocasta’s Noose proposes a sexy, funny take on the classic tale of incest and passion, re-casting Oedipus and Jocasta as student and very, very bad teacher.
8) Processed Theatre’s Nothing Never Happens in Norway combines comedy and musical theatre in a show that celebrates and parodies everything from Ibsen’s “baddest bitches and blandest backwoods” to customs and oddities typically—or atypically—Norwegian.
7) Fringe-for-All hostess Kirsten Ramussen shows us her Rocky side in Tough!, a one-woman show in which a lounge singer and boxer confront each other in the ring, featuring live music and Ramussen’s hilarious antics. (cont'd)
6) Nelfanto’s Un parfum de Montgolfière tells the dramatic, passionate and comedic story of a confrontation between a mistress and her domestique, exploring the dissolution of an affair in this comédie fatale.
5) Francophiles will love On n’a qu’un certain nombre de mots at the Théâtre de l’Ingénu, a two-person play performed by Claudia Levasseur et Olivier Rousseau whose funny and irreverent monologues trace a link, and explain the stories, of two people who were destined to be (dans la merde) together.
4) Opera lovers, here’s a rare treat: Productions Belle Lurette’s Cousino et Sylvano (ou l’opéra pour les nuls) injects some humour and silliness into the great, famous love duets of librettos gone by, presented by soprano Etienne Cousineau and tenor Sylvain Paré.
3) A twisted take on a childhood classic, Capricornucopia’s production of The Little Prince as told by Machiavelli presents a how-to guide on bullying the weak, bribing the strong, and paving your own little princely way ahead into the world of social manipulation.
2) POP! Productions’ Kissed by a Butterfly tells the story of room 1506 and meeting of four patients at the “crossroads between life and death.” Based on the diaries of performance artist Shiong En-Chan, Kissed promises to be beautiful and provoking.
1) Impressive and eerie, Jane Gilchrist’s Out of the Fog tells the story of two women—a strict, intimidating teacher, and a caring guidance counsellor—and their struggle and clash to save a child. Gilchrist’s preview performance was spellbinding and intense, making Out of the Fog our pick for Fringe-for-All’s standout preview.
Remember, there are dozens more ways to get your Fringe on, so check out the schedule, get a buddy, and support your local arts scene. Happy Fringing!
Posted by THE CHARLEBOIS POST at 3:59 PM