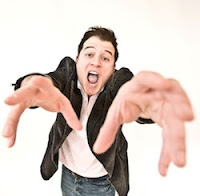 FUCKING STEPHEN HARPER: How I Sexually Assaulted the 22nd Prime Minister of Canada and Saved Democracy is a one man show in which Rob Salerno shares with the audience his quest to get an interview with Conservative PM Stephen Harper in order to confront him about his political disregard for Queer issues in Canada. After feeding the Petit Campus with an overwhelming amount of political facts regarding the federal government’s lack of support for the LGBT community in Canada, Salerno finally gets to his story: he launched himself onto Harper in an attempt to grab the Prime Minister’s attention, but instead grabbed his balls in order to break his fall.
Though Salerno is undoubtedly a composed and confident performer, the PowerPoint presentation that accompanied his monologue did him no favors. There were a few moments where he accidentally skipped a slide or two, thus interrupting the flow and impact of the show. However, it is important to keep in mind that Monday was the first time he was presenting in Montreal, so it is very possible that these minor glitches will be resolved as the week goes on.

Salerno was definitely at his best when in storytelling-mode, but unfortunately these moments were rare throughout FUCKING STEPHEN HARPER. The attempt to “educate” the audience regarding the inadequacies of the Harper government was overdone, causing the show’s comedic and thought-provoking potential to suffer.
Overall, the show was decent.