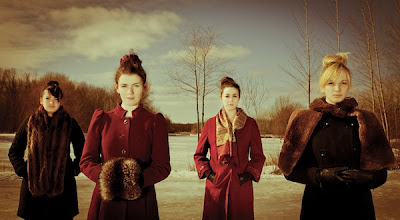 Upstage Host Eric Sukhu spoke with Director Nichole Carlone about Processed Theatre’s presentation of Nothing Never Happens in Norway at the 2012 Fringe Festival. Below is an abridged version edited by Estelle Rosen, CharPo Editor-in-Chief.
UPSTAGE:  Tell us about Nothing Never Happens in Norway
CARLONE: It's a musical adaptation of Ibsen’s Rosmersholm and The Master Builder adapted by Joanne Sarazen.
UPSTAGE: You mentioned last time you were here that Processed Theatre does only musicals. Why?
CARLONE: I personally love musical theatre. If  you’re going to be an artist, it’s so tough you have to be doing something you really love to do. If you’re going to do something you’re meh about, not a good place to go.
Musicals offer something for everyone, singing, dancing and story. It’s more entertaining and more appealing to people who don’t normally go to theatre.
We have a small musical theatre community in Montreal. At Processed Theatre we only do contemporary musicals; those written in the last 20 years. A lot of companies prefer the older classics like Into The Woods and Cabaret.
Now we’re starting to develop new works and commissioning our own shows.

UPSTAGE: Why do you think that happens?
CARLONE: Because they’re classics; and they’re known. I consider myself a Broadway nerd but a lot of people like the more popular musicals.
I think that’s where we stand out. The three shows we did previously were Montreal premières; Reefer Madness,  Edges and The 25th Annual Putnam Spelling Bee. Now we’re starting to develop new works and commissioning our own shows.
UPSTAGE: And this is one of them. Tell us more about it.
CARLONE: It's two parallel stories, set in Norway in the 1890s  when women don’t have a lot of say or sway. They are two women who play with the trapped situation they’re in and tamper with the minds of the men they’re involved with to try and run the show behind the scenes.
UPSTAGE: What was the process for selecting actors?
CARLONE:  We needed strong actors. This is the first musical Joanne has written. [Music composed by Shayne Gryn.] So I focused on actors who could tell the story and also had great voices.
These are all people we’ve worked with before so we trust them to give us feedback.

UPSTAGE: Tell us about the cast.
CARLONE: George Bekiaris who was in Reefer Madness; three people from Spelling Bee plus two new people Michaela Davies and Harper Duffy.
UPSTAGE: What do you see for the future of this piece?
CARLONE: We’re treating this as a workshop. We want to see how it will be  received; and flesh it out into something bigger. These are all people we’ve worked with before so we trust them to give us feedback. When developing a new play it helps to get input from an actor. You the playwright might find it clear but if the actor can’t figure it out, the audience won’t either.
Buy tickets
Posted by THE CHARLEBOIS POST at 12:01 AM