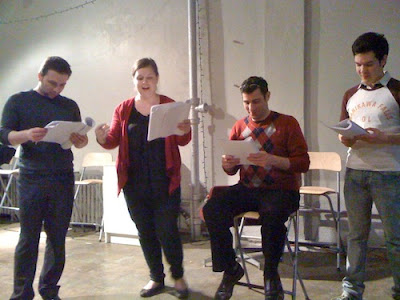 Inside the Boys' Club
Finding Callistro
by Emma McQueen

When Brave New Productions first approached me to direct Callistro the Great, a South American political comedy with (at the time) an all male cast, my first thoughts of excitement were also tinged with those of trepidation. What did I know about military dictatorships and Communist regimes? And how the heck could I make something so delicately controversial into a rollicking good time? The thought of relating to an entirely masculine cast also raised some concern, as I knew that if I were to create this world with them, it would need to be harsh, and chauvinistic, and altogether… male. Would I, with my female perspective, be able to recreate the boys’ club atmosphere that permeates every scene?
I laughed. I was drawn in. I was challenged.

When in doubt, look to the text, I’ve always believed. I re-read the play. Then I read it again. I laughed. I was drawn in. I was challenged. I saw that this is a story not only for those who have a personal connection to the time and place, but even more so for those who have only their impressions and assumptions to go by. I immediately contacted BNP and accepted the position.
The play centers around a fictional South American nation called San Miguelo, which is ruled by a ruthless dictator, Ignatzio. The playwright, D. M. Bruce, carefully avoids aligning San Miguelo with any specific South American nation, although many parallels to several different governments surface along the way. San Miguelo needs money, and Salone, the Minister of Trade and Commerce, must raise it quick. After a few failed attempts, Salone innocently gets the US government involved, and things become a bit complicated…
Ultimately, we were looking for performers with great physical awareness, comedic timing, and that sense of play so essential to building a comedy.

To cast the play, we auditioned several actors from BNP’s most recent production (a condensed version of The Importance of Being Earnest complete with male Cecily/Cecil), and also met with many other emerging Montreal actors. It was at this point that we also made a decision to change the gender of one of the characters, which we saw would serve well as a foil to this male-dominated world. Ultimately, we were looking for performers with great physical awareness, comedic timing, and that sense of play so essential to building a comedy. Much of the humour in this play derives from what is not said, the moments between understanding for the characters, the awkward pauses before taking action which make that action all the more ridiculous for having been chosen. It was extremely important that our actors understood how to use the silence as much as the words. In fact, much of the time we spend in rehearsals deals with issues of exact timing, such as the length of a pause, or the choreography of a silent exchange between rivals. The rhythm of comedy is essential to pulling in an audience. If you give them too much time to laugh, they’ll lose focus, but if you don’t give them enough, you have the same problem.
We are now less than a week away from opening night on June 13th. We move into the theatre on Monday, when the visual fun begins of physically creating the world we have been crafting in our imaginations for the past few months. Costume fittings are sparking the actors’ imaginations, sound cues add a dimension of reality and depth, and the publicity team has kicked into overdrive to make sure we’re able to show off our work to as many people as possible. For me, this is the most exciting stage, when all the elements come together. I’ve held a picture in my mind for so long that it becomes almost a dream, so to see it come to life in front of me is a rare treat.
For the actors, the most exciting moment comes when they have a live audience in front of them on opening night (although having costumes and a set is fairly high on that list as well). There’s nothing quite like hearing that first laugh, and knowing that yes, we are in fact putting on a comedy.
Although initially I had reservations about my ability to make this play live, I’m very glad that I did take on the challenge. I am extremely proud of the work we’ve done in putting together this show, and I believe our audiences will see how much we’ve loved every minute of it.

Show details
Posted by THE CHARLEBOIS POST at 6:17 PM