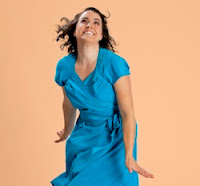 Again, oppressive heat in the venue. Again a performer having to work extra-hard just to keep her audience from keeling over. But this did not seem to slow Yana Kesala down for a second. However, the show was not without two off-putting things right at the start - both theatrical pet peeves of mine: a grown woman playing a cutesy kid and a toss-off reference to the Holocaust (especially off-putting because anyone who knows history has a fairly dim view of the Ukraine's treatment of the Jews).

But Kesala worked and the story she tells - adapted from her own mother's life-story - is an interesting one and her mother sounds like a remarkable and funny character and it is clear that Kesala is mad for her. The person is vivacious, full of hope and trying to get beyond the fact that she is a pudgy young woman with apparently no prospects for a decent marriage. It is, ultimately, the story of that glowing, radiant personality and we stay glued to it right up to its cliff-hanger ending. Bring cold water, dress light, take your fucking shirt off if you have to, but give this one a look.