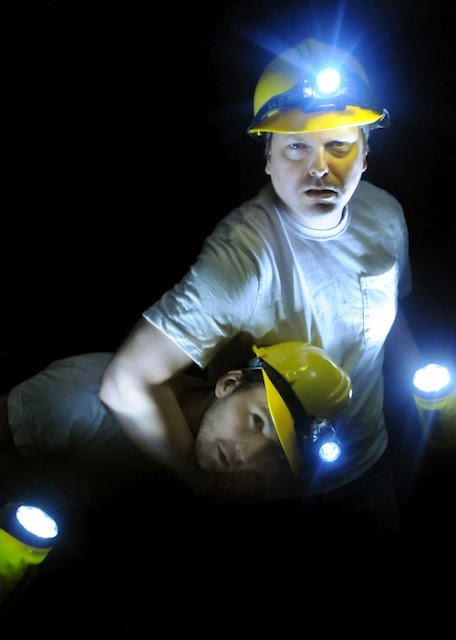 Staging a Disaster
Fiddling with Miners
by Jonathan Fournier

THE IDEA
The idea to write about a pack of trapped miners did not come from my head, nor my heart. It was thrust upon me in the form of a small school assignment in the Fall of 2010. "Write two pages - in any style/format - about the Chilean Mining accident". I procrastinated and procrastinated... What did I have to say about a bunch of miners trapped in a cave? It seemed so distant, a world away. But it really isn't.
I finally squeaked out two pages, in which a few miners lament that they're going to miss out on their dreams because they're stuck in a cave. I realized that there was something relatable about this after all. Few people will experience being stuck in a cave, but haven't we all had times where we worried about not being able to achieve our dreams? We've all felt "trapped" in bad situations at one time or another and it can be just as demoralizing as being trapped in a literal cave. Maybe your "cave-in" is that you can't afford school or that you're an anglo in a francophone province. This is the hook of the miners' story and this is what made me continue with it outside of class.
Santos, the young joker who wants to be a comedian... Or a math teacher... Or a hairdresser. But he finds himself in a mine because that was easier to do.

Once I understood the feeling I was going for, I drudged ahead. I came up with two characters who embodied this hopelessness; both in and out of the mine. Mario, the grizzled older miner who gave his life to the mining industry and laments that he abandoned education and sports to do so. Santos, the young joker who wants to be a comedian... Or a math teacher... Or a hairdresser. But he finds himself in a mine because that was easier to do. These are two guys who were never going to achieve anything they wanted on their current paths and the cave-in forces them to confront that. They worry about their missed opportunities more than their shrinking food supply. And it's these missed opportunities that continue to haunt them until the dramatic climax.
But is it funny, you ask? Yes. I couldn't make a play so depressing without throwing in a healthy dose of jokes to lighten the mood. If you laugh and then feel bad about having laughed, I'll have done my job right. It was fun, because one of my characters wants to be a comedian, so there's two layers to the humour: the natural comedy that arises from the situation and the way Mario and Santos react to one another, then there's the humor that Santos the comedian tries to create by doing stand-up and goofing off... It was a lot of fun and a big challenge trying to balance those elements. In this regard, I've been blessed to have Santiago Espinosa and Brian Degrace as my actors. They're both really funny guys and they get the humour I'm going for (Santiago, I should add, is a rising stand-up comic).
WHY SHOULD PEOPLE SEE THIS AT THE FRINGE?
Well, first and foremost, because it's going to be a lot of fun. There's great jokes. Pickaxes and dynamite are involved! It's also going to be the first show I've ever seen where the actors provide their own lighting. The flashlights add something really cool to the show; and we're trying to do some cool things with them choreography-wise.
You'll get to have the unique sensation of being in the cave with the miners. It'll be warm, it'll be dark, it'll be tight. The greatest asset of the Freestanding Room (and other "black box" spaces) is that there's no clear line where the audience ends and the action begins. When the Freestanding Room is used well, you really feel like you're in the space with the characters, and that's really going to pay off in Miner Inconvenience.
Most importantly, I think it really resonates with what's happening in Montreal today. It's all about staring a bleak future in the face and struggling to make a brighter future for yourself. I think it's pretty inspiring!
I think audiences will enjoy the show and I hope to see you out there.
Show details
Buy tickets
Read an interview with Jonathan Fournier
Posted by THE CHARLEBOIS POST at 12:01 AM