EVENT: She Has a Name (Fringe) 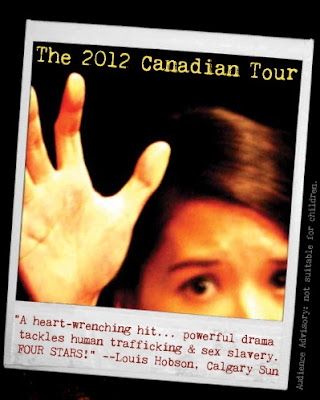 Burnt Thicket Theatre & Raise Their Voice present She Has A Name in Montreal June 16-24
Cross-Canada Tour of Critically Acclaimed Play about Human Trafficking Comes to Montreal Fringe Festival
Montreal, Quebec (April 26, 2012) – Burnt Thicket Theatre in partnership with Raise Their Voice is proud to present She Has A Name by playwright Andrew Kooman at the St-Ambroise Montreal FRINGE Festival June 16-24 in the MAI (Montréal, arts interculturels).  She Has A Name exposes the dark world of human trafficking.  During its world premiere in Calgary and Red Deer last winter, the play received critical acclaim and sold out every performance.
The Montreal production is the fourth stop in the She Has A Name 12 city cross-Canada tour, having played to audiences in  Lethbridge, Saskatoon and Ottawa.  Following Montreal the tour travels east with to Halifax. In July, the tour swings westward with performances in Winnipeg, Calgary, Victoria, Vancouver, Kelowna, Edmonton. The tour concludes with performances in Red Deer October 2-6.
She Has A Name focuses on Jason, a Canadian investigator who poses as a ‘john’ to build a legal case against an organized brothel that is trafficking girls into Bangkok.  Jason must win the trust of a young prostitute known only as Number 18 and convince her to risk her life to testify.
“She Has a Name is a powerful piece of theatre that both thrilled and inspired audiences during our successful world premiere," says director Stephen Waldschmidt. "We look forward to bringing this timely story to thousands more Canadians from Halifax to Victoria.  Montreal is reportedly a port city for women being trafficked from Europe, as well as a source city for  vulnerable minors being trafficked into Ontario as sex slaves.  I’m grateful to report that we have raised more than $85,000 from a wide range of supporters from across the country who believe in the need to tell this story to Canadians.”
"She Has A Name will open the eyes of Canadians to the reality that there are millions of innocent victims in the world today who live in these brutal conditions," says Mark Wollenberg, the Western Canadian representative of International Justice Mission Canada, an agency that works overseas to secure justice for victims of human trafficking.  "But more importantly, we hope that it will open the hearts of those who attend to become engaged in bringing an end to human trafficking. This play brings the nameless victims of trafficking into our western world and makes them all too close and too real to ever forget.  Canadians must see this play!"
Waldschmidt added that Burnt Thicket Theatre and Raise Their Voice are still looking for sponsorship opportunities from corporations, small businesses, non-profit and religious organizations, as well as donations from the private sector.