QUEEN OF THE STAGE
joel fishbane
Here’s a funny story: last winter I auditioned for the Montreal premiere of Elizabeth Rex, Timothy Findley’s award-winning play about a meeting between Queen Elizabeth and Shakespeare’s company of actors. After discussing the show, director Mike Payette asked if I had any questions. “Just one,” I said. “Is Leni Parker playing the Queen?” Mike’s smile was almost imperceptible as he neither confirmed or denied the question. Suffice it to say I didn’t get the part; but a few weeks later, I learned that Leni Parker would indeed be playing that most famous of all British queens.
I can’t take credit for putting the idea into Mike Payette’s head; he’s a smart enough guy that he had already offered her the role by the time I came along. And why not? Leni Parker is one of Montreal’s most respected talents, a Concordia grad who has become known for the regal bearing she brings to every role she plays. Whether it’s the titular Baroness in Michael Mackenzie’s The Baroness and the Pig or the romantic heroine of Collen Curran’s True Nature, Parker can be countered on to provide an imposing presence and the sort of wit that can turn a simple greeting into a cutting remark.
In person, Parker is charming and chatty, happy to talk about anything from her career to her thoughts on Findley’s eponymous queen. Having worked for years in all manner of performance – she’s had an enviable career in film, television and theatre – Parker’s finally reached the point when she’s choosing her roles carefully, often basing her decisions not only on the material but also on the other artists involved. 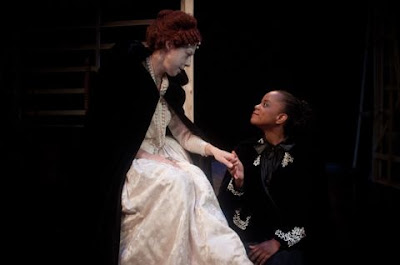 With Elizabeth Rex, she was able to have the best of both worlds. “Findley is such a talent,” she gushed. “To do this is such a gift.” She has similar praise for Tableau d’Hote Theatre and her two directors, Mike Payette and Liz Valdez - a clever move given that this is a play that has gender duality at its core.
An actress who loves research, Parker entered a small part of Heaven when she took on  Elizabeth Rex. The show allowed her to sink into a complex world whose politics and customs are based around a single social hierarchy: there’s God, the Queen, Shakespeare - and then everyone else. Based on an actual historical event, Findley’s play is set on the night before the execution of the Earl of Essex, Elizabeth’s possible lover. Craving distraction, the Queen hires Shakespeare’s company to entertain her.
Instead, she is drawn into a night long sparring match with Ned Lowenscraft (played here by Brett Watson), an actor who specializes in playing women. Dying of the pox, he cares nothing for protocol, a fact which ends up endearing him to the Queen. “If you teach me how to be a woman,” Elizabeth says, “I’ll teach you how to be a man.”
For Parker, Elizabeth is fascinated by Ned’s ability to touch into femininity, something which Elizabeth has had to suppress in order to survive in politics. “Her role as a monarch is tied into who she is,” Parker told me. “The challenge is to marry Elizabeth the ruler with Elizabeth the woman.” She’s trying not to be influenced by the army of high-profile actors who have played Elizabeth before her both on stage and on the silver screen: when opening night comes, she’s hoping this particular interpretation will be entirely her own.
We agreed that there are definite similarities between Elizabeth’s need to navigate politics and an actress’ own need to make a life in the arts. Although this is definitely changing, both worlds are still dominated by men and clichés about the sorts of roles women are expected to play. “As a woman, you gotta go those extra miles,” Parker told me. “You sometimes gotta fight to get into the room…we don’t automatically have the chutzpah.”
Elizabeth Rex is already running at the Segal Centre’s Studio space and the cast – which ignores both race and gender – revealed a great talent for exploring the depths of Findley’s world. As for Parker, she proved that both Mike Payette and I have a great gift for knowing a drama queen when we see one. “Tell me something of real life,” the Queen pleads at one point, in a moment that encapsulates the crux of her crisis. Parker clearly knows this: she infuses the line, and indeed the entire role, with the wry knowledge that she is doomed to forever play the part of a monarch. Like Shakespeare and his men, she’s an actor too – and like them, she’s all too aware that every part comes with a cost.
Elizabeth Rex by Timothy Findley runs at the Segal Centre until July 1. For tickets visit www.segalcentre.org or call 514.739.7944.

Read our review of Elizabeth Rex
Posted by THE CHARLEBOIS POST at 12:01 AM