i didn't plan this very well. a diary does imply a certain amount of daily-ness, doesn't it? i should've considered the fact that being in full time mime school by day and rehearsals by evening wouldn't leave much room for writing. oh well. once a week is okay too. let's just call it a fringe wiary. which is good, because i'm feeling pretty wiry these days. i am learning so much from jean asselin and the troupe over at espace libre: the combination of rigour and improv involved in mime corporel has put my body in a constant state of joyful readiness. then i get to bike over to mcgill and engage my whole self in the soul-plumbing depths of euripides. yay.

if life were that simple; work on my craft, eat, sleep, hang with friends, then yes, i probably could get more writing done. but there's this other thing. it's called promotion. and right now, it seems to be supplanting all my writing time. it started with the fringe-for-all, and the last-minute attempt to pull something together, which resulted in my new favourite (re)arranged quote from pat donnelly: "Johanna Nutter...(is)...pretty lame...(and)...very very talented". :) 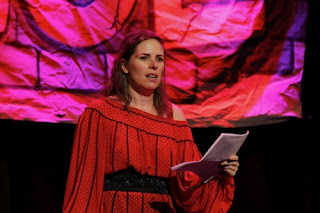 then there was the day i was double-booked at the zoofest launch and the directors' circle barbecue at the centaur. necessity proved the mother of invention and i found a great new way to promote my pregnant brother: use a surrogate. in this case, it was sterling mawhinney, a good friend and actor who i have long admired for his sincerity and off-beat but so on-the-money sense of humour. by all reports, he did a beautiful job. here he is at the launch, making friends and influencing people to come see the show. 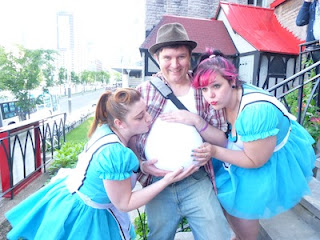 meanwhile, i was off at the centaur, getting to read a bit of good people with a volunteer from the subscriber audience. here i am with paul butler, telling the turkey story. i can't wait to do this play. and it did occur to me while i was there that the centaur has a whole TEAM of people looking after their promotion. aaahhh... 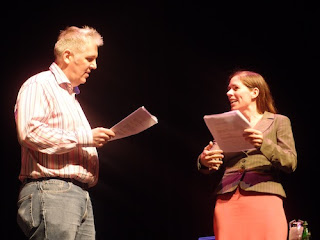 not done yet, i still had the qdf launch left. lynn and carina let me go a little early from rehearsal and cassandra let me arrive a little late to the launch, and patrick charron graciously took on the role of surrogate. he did a much better job of tooting my pregnant brother's horn than i ever could have done: even comparing my play to mordecai richler's work. i certainly never could've done that. then i did a little excerpt, and voila. as far as my solo show is concerned, i think i've got these promos licked. jeremy hechtman has already signed on to be the next pregnant man. 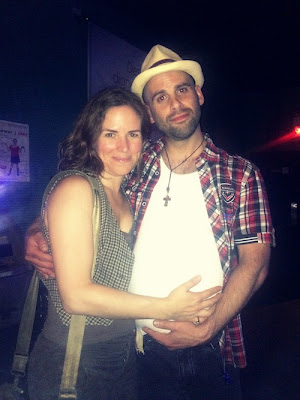 oh, and for the record, that little blurb in the zoofest brochure, the one that calls my pregnant brother, "just like the movie Junior only actually good"? that's not me. i didn't say that. and i didn't okay it. having someone else speak for you can also have its not-so-awesome side. but it doesn't matter. having my show listed right under a picture of my hero, louis ck, makes it all worthwhile. 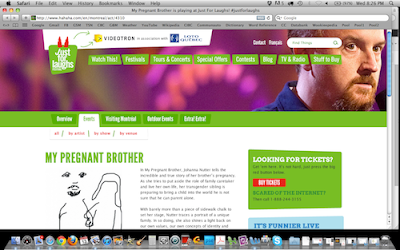 and now, no more promotion. tomorrow night HIPPOLYTOS gallops out of the gate. either it stands on its own legs or it doesn't, and no amount of flyers, programs, facebook pages or previews is gonna change that. hyah!


buy tickets for hippolytos
Posted by THE CHARLEBOIS POST at 3:44 PM