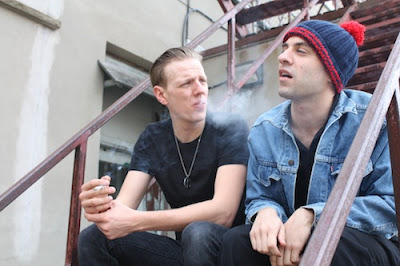 Theatre of the Beat presents:
Gadfly: Sam Steiner Dodges the Draft as part of the St. Ambroise Montreal Fringe Festival.
When the government calls on you to fight, what do you do? What if they won’t take no for an answer? A whole generation of Americans had to answer that question. Gadfly tells the story of one man who decided to say no, and how he dealt with the consequences.
“It was powerful, far-out. I am SO GLAD I saw it!” – (Audience member at Conrad Centre - Kitchener
"Gadfly" is the true story of Sam Steiner, a draft dodger who flees to Canada
during the Vietnam war. Utilizing a versatile four actor cast, a creatively minimalist
set, music and video, "Gadfly" follows Sam from the conservative town where he
was born, through his epiphany at the Selma-Montgomery marches, and his quest
to stay one step ahead of the draft board as he’s hunted down by the powers that
be.
“The staging was excellent, the acting passionate and the script witty.” –
(Audience member at Mackenzie Hall -Windsor)
Through a wide variety of characters, ranging from Drill Sergeant to Drug
dealer, conservative Mennonites to idealistic student journalists, Gadfly brings
history to life in dramatic and humorous ways.
“Loved the show. Wonderful script and performance.” – (Audience member at Canadian Mennonite University – Winnipeg)
Theatre of the Beat has performed "Gadfly" to enthusiastic and sold-out audiences across Canada. Those who lived through the Sixties are unanimous that the play perfectly captures the atmosphere and zeitgeist of the times; those too young to remember are confronted with a past eerily similar to their present. Challenging, hilarious, moving and inspiring, "Gadfly" delivers.
Venue 8 - Club Espagnol | 4388 Boulevard St. Laurent, Montreal |
Saturday June 16th 18:00, Sunday June 17th 21:30,
Tuesday June 19th 18:00, Wednesday June 20th 19:45,
Friday June 22nd 16:45, Saturday June 23rd 20:45
Tickets: $12/10 students
Tickets available at http://www.montrealfringe.ca/en/show/gadfly-sam-steiner-dodges-draft
Contact: John Wideman – info@theatreofthebeat.com
Twitter: TheatreBeat
Web: www.theatreofthebeat.com
Blog: www.theatreofthebeat.wordpress.com