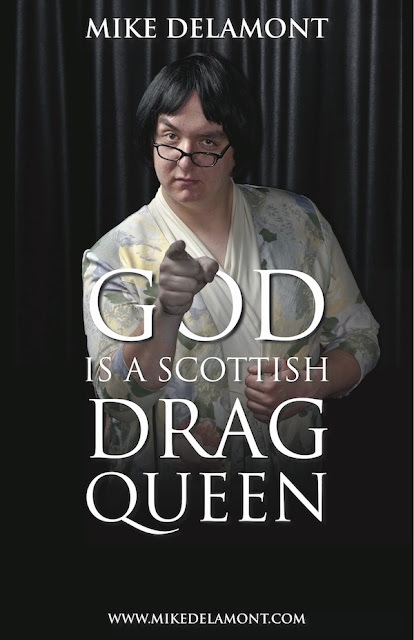 GOD IS A SCOTTISH DRAG QUEEN
By Mike Delamont
August 16 – August 24
Cabaret du Mile End
5240 Park Avenue, Montreal
Tickets: $12
Available at the door or in advance by calling 514.849.FEST or by visiting http://montrealfringe.ca/en/show/god-scottish-drag-queen
Winner of Best Solo Show at the 2011 Victoria Fringe Festival, GOD IS A SCOTTISH DRAG QUEEN is set to make its Quebec debut at this year’s Montreal Fringe Festival. A 75-minute performance by the greatest of deities is an event not to be missed. Based on the original concept by comedian Mike Delamont and writer Jacob Richmond (Lego Land, Ride The Cyclone) this God is not like any you have ever seen. In this one of a kind show, God will skewer everything from Bieber to the Pope to Skydiving and the Mayans. With the success of the Bible and movies like Passion of The Christ and the 10 Commandments breaking records and winning awards, it's about time for God to have a stage show! This roller coaster of a stand up show has sold out all of its previous Canadian performances with some audiences needing to wait in line for up to 3 hours just to get standing room tickets. “A cross between Dame Edna and Billy Connolly, with a dollop of Eddie Izzard” says CanWest News, and Michael “Can do more with a throw away line than most actors can with a monologue” according to CBC Radio. God Is A Scottish Drag Queen will play at Cabaret du Mile End for only 6 performances:
June 16th at 9:00pm
June 17th at 5:30pm
June 19th at 8:45pm
June 21st at 6:00pm
June 22nd at 8:30pm
June 24th at 4:15pm
This show has just finished its sold out run at UNO FEST, North America’s Longest Running Festival of Solo Performance, even outselling popular Canadian performers Carmen Aguirre and Hawksley Workman. This is not a show to miss!
Posted by THE CHARLEBOIS POST at 6:18 PM