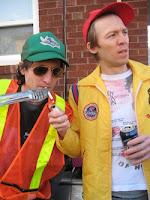 This mish-mash of sketch comedy and improv, framed within the premise of a barbecue organized by low-lifes Dwayne Tugg, a “soccer dad without any kids from Lethbridge, Alberta” who is running for Prime Minister in 2015, and Chugger, his future Minister of Self Defense, repeatedly fell flat during its 60 minute time slot. The show began with an awkward introduction of the two characters (which I assume was improvised) which had me looking at the time within the first fifteen minutes of the spectacle. Though Scott Rawson (Chugger) had a few good lines that made me chuckle, the unpromising start to the performance had me convinced that I was in for a disappointing experience.
Though there were funny moments here and there throughout the show (mainly to the credit of Rawson’s impersonations), Tugg and Chugger’s Midnight Barbecue definitely lacked the wit necessary to keep an audience engaged and laughing.
Tickets
Rating: